Will Goodman is recognized as "a truly excellent trial attorney" who is "very practical and can really connect with jurors." CLIENT QUOTED IN CHAMBERS USA 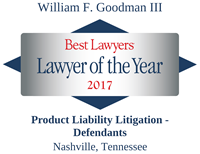